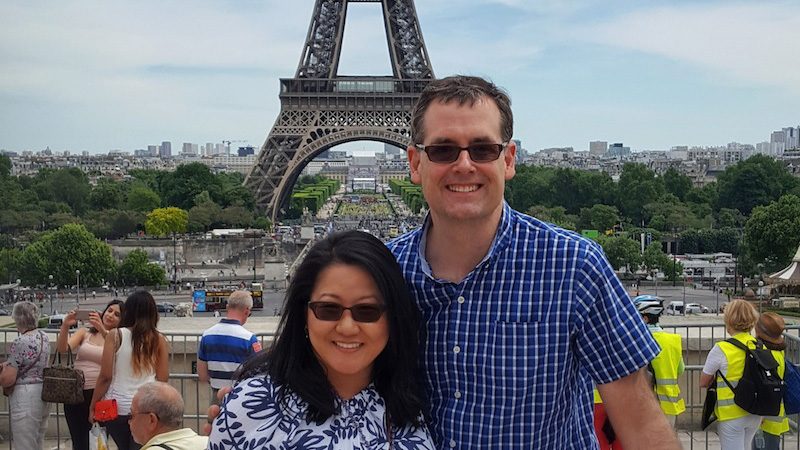 Destruction from an EF-4 tornado that tore through Tuscaloosa on April 27, 2011 was what brought Lisa and Chris Gaskill together as a couple.

Lisa, 42, and Chris, 48, both lived and worked in Tuscaloosa and knew each other already through church and community choir.

When Lisa volunteered to work at a shelter on the Sunday following the tornado and needed someone to go with her, she asked Chris to go.

The workday was all it took for them to realize how much they enjoyed each other’s company.

“We knew immediately we were just best friends,” Lisa said.

By the end of that summer, they were talking about a future together, Chris said.

Chris is an associate professor in the University of Montevallo’s Department of Communication Science and Disorders, and Lisa is finishing her last year as a Doctor of Philosophy student at the University of Alabama. She will serve as one of three Gifted teachers at Vestavia Hills Elementary Central in August.

The couple moved from Tuscaloosa to Alabaster in November 2016.

Destruction brought Lisa and Chris together six years ago, but beautiful sights––and traveling to foreign cities to see them in person––have brought them joy in their young marriage.

Travel was a significant part of Lisa’s and Chris’s lives when they were single, too.

Lisa was born in Seoul, Korea. She and her twin sister were adopted, and in 2009, they traveled back to Seoul and visited the orphanage where they lived.

Lisa has been to at least 16 different countries over the years, and she spent time in Japan as an adult teaching English.

“Traveling was always something I wanted to do, whether it just be for vacation or mission trips,” she said.

Chris has been to Brazil more than once and has visited Sweden, Denmark, Russia, England, Scotland and Wales.

Their first trip after they were married – their honeymoon – was to Asheville, North Carolina.

“It fits who we are,” Lisa said. “We wanted something low-key, very relaxing and it’s very food-centric.”

By “food-centric,” Lisa meant the fare in Asheville was not average; their meals came from local eateries, not chain restaurants. They also participated in a walking food tour of Asheville, which Chris said was “just so good.”

Along with sightseeing, Chris and Lisa are adamant about eating good, local fare wherever they go.

And they aren’t shy about admitting that.

The blog they created to share their travel experiences with family and friends is called “2 Hungry Travelers,” and the tagline is “Exploring the world one bite at a time.”

Chris has handled most of the blog writing thus far, while Lisa has been the photographer behind the lens, capturing the high points of their trips to places like the Caribbean, New York, Nashville and Hilton Head, one of their favorite places.

But the biggest adventure they are in the process of documenting since returning to Alabama is their recent trip to Europe.

“We knew we wanted to get back to Europe,” Lisa said.

Last August, she found a Groupon deal for a 15-day Europe trip, and they booked it for this May.

“We booked it enough in advance to where we could get somewhat of a savings,” Lisa said. “It gave us enough time to plan for the trip that far in advance. The package deal had all the transportation and hotels.”

Lisa had been to Paris before, but Chris hadn’t visited any of the cities prior to their trip.

They started off in Barcelona, where a highlight was seeing the Sagrada Família, a place of worship steeped in history.

According to Sagradafamilia.org, five generations have already witnessed the temple’s rise, but construction is ongoing. The history of the Expiatory Temple of the Holy Family, known as the Sagrada Família, dates back to the 1860s.

While in Barcelona, they visited the beach and enjoyed the open-air markets, particularly La Boqueria, a famous market located in the old part of Barcelona.

“You had land, you had beef and then you had the sea,” Lisa said as she described the market offerings. “Fresh fruits and vegetables and pastries … the amount and quality of both of those things was unlike anything I’ve ever seen. We definitely recommend that to anyone.”

Rome was their next stop, and not surprisingly, was filled with historical sights they were eager to see.

“Just walking around, everywhere you look is something that was built in B.C.,” Lisa said. “It’s amazing in that way – the history of it, where we came from, our democracy, our government (and) for people who go to church, Christianity.”

Lisa and Chris saw the Roman Colosseum, along with the government buildings of the Roman Forum and Arch of Constantine.

“We saw the spot where, supposedly, Caesar was killed, and where Marc Anthony stood over his body and gave a speech,” Chris said. “There’s so much history in these places that no one knows about. You have to pace yourself.”

An unexpected find was the Ponte Quattro Capi, an ancient stone bridge in Rome. As Chris and Lisa crossed it on foot, they met a watercolor artist painting a scene with the bridge, and purchased one of her paintings.

“It was a little outside the city center,” Lisa said of the bridge. “You never know what you’ll find.”

They also walked in the vicinity of the Vatican and saw St. Peter’s Square.

Regarding food, the Roman gelato stood out to Lisa and Chris.

“Our hotel recommended this old place in Rome. It was our first gelato of the trip,” Chris said. “It was excellent.”

From Rome, they took a train to Florence, which Lisa likened to Disney World in high season.

“It’s crowded,” she said. “Except for the crowds, it’s just beautiful. If you’re willing to wander a few blocks away, you’ll end up on these quaint little side streets. That was our favorite.”

Their next stop was Venice, which Chris described as magical, beautiful and breathtaking.

“Everything looks so old in Venice,” Chris said.

To venture around Venice, Chris and Lisa had to walk or take water boats.

In classic Venetian style, they took at least one gondola ride along the canals.

The couple’s final stop was Paris, where they fit in museums and other sights at a comfortable pace.

“It was very relaxing,” Lisa said. “We didn’t push ourselves.”

They encountered a bit of Alabama when they struck up a conversation with a man from Gardendale in a Paris café.

Lisa and Chris were able to check things off their Europe to-do list.

Lisa’s undergraduate degree is in music, and she sings opera. Singing opera somewhere in their travels was a must for her.

“I sang one of my arias in a courtyard in Italy,” she said. “This was the closest to being on stage in Italy.”

Lisa bought an Italian leather bag in Florence and a silk scarf from Barcelona.

She and Chris also procured trinkets for family members, artwork from local artists and a CD from a musician giving a street performance.

“In each Italian city, we got a painting or two,” Chris said.

They came home with plenty of photographs, many of which Lisa has used for the notecards she makes by hand.

Their next travel adventure is a touch closer to home than Europe: Hilton Head, South Carolina. 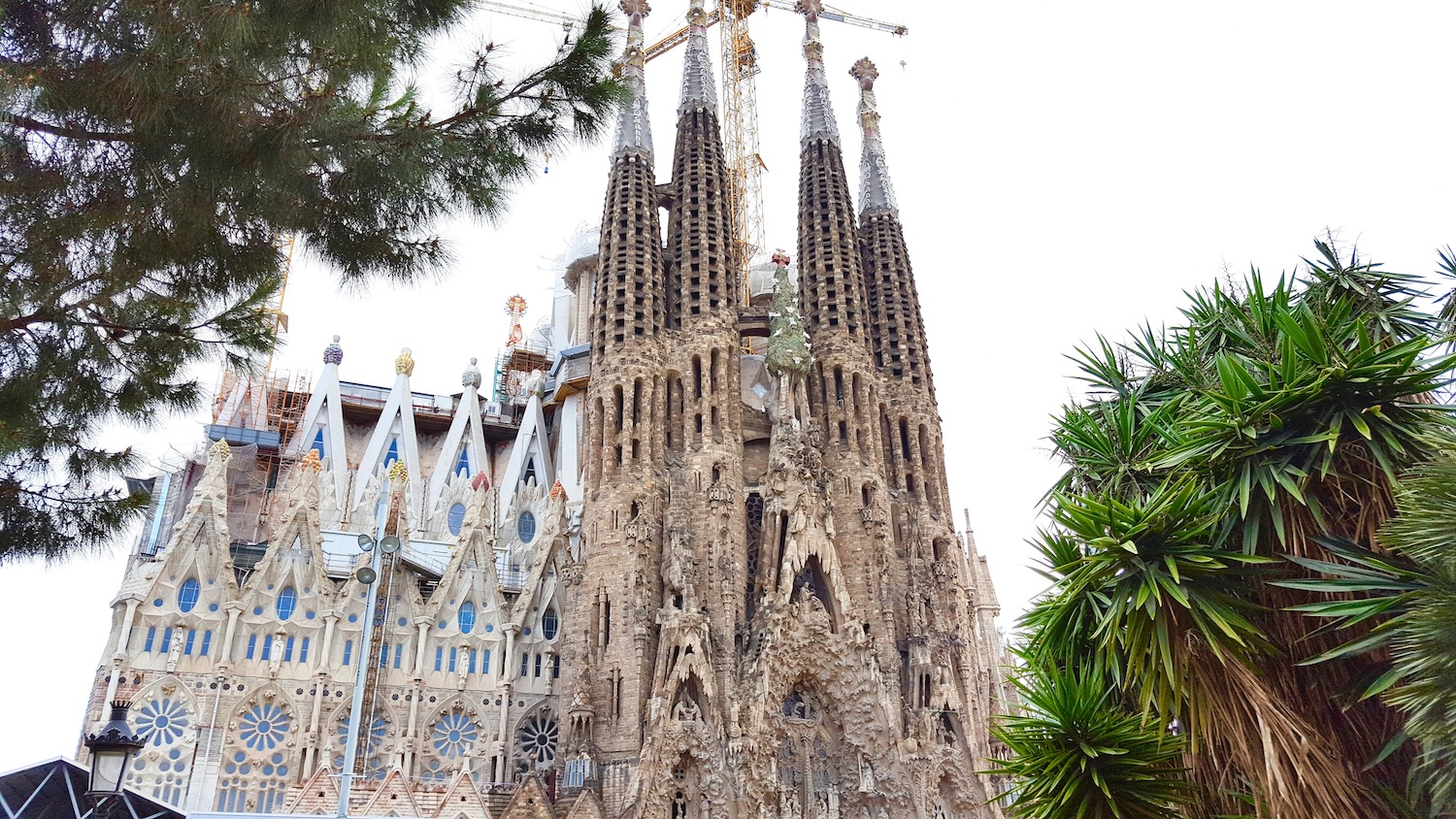 In Barcelona, the Gaskills were intrigued by the Sagrada Família, a place of worship whose beginnings date back to the mid-1800s. They also soaked up local culture while perusing La Boqueria, a large, open-air market featuring fresh meats, produce and many other goods. 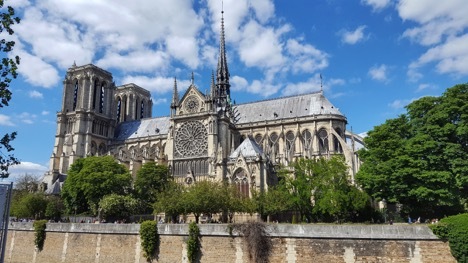 Paris was an unexpectedly relaxing portion of the trip. They saw multiple sights and museums, but didn’t push themselves to conquer the entire city in two days. They also befriended a man from Alabama in a Parisian café. 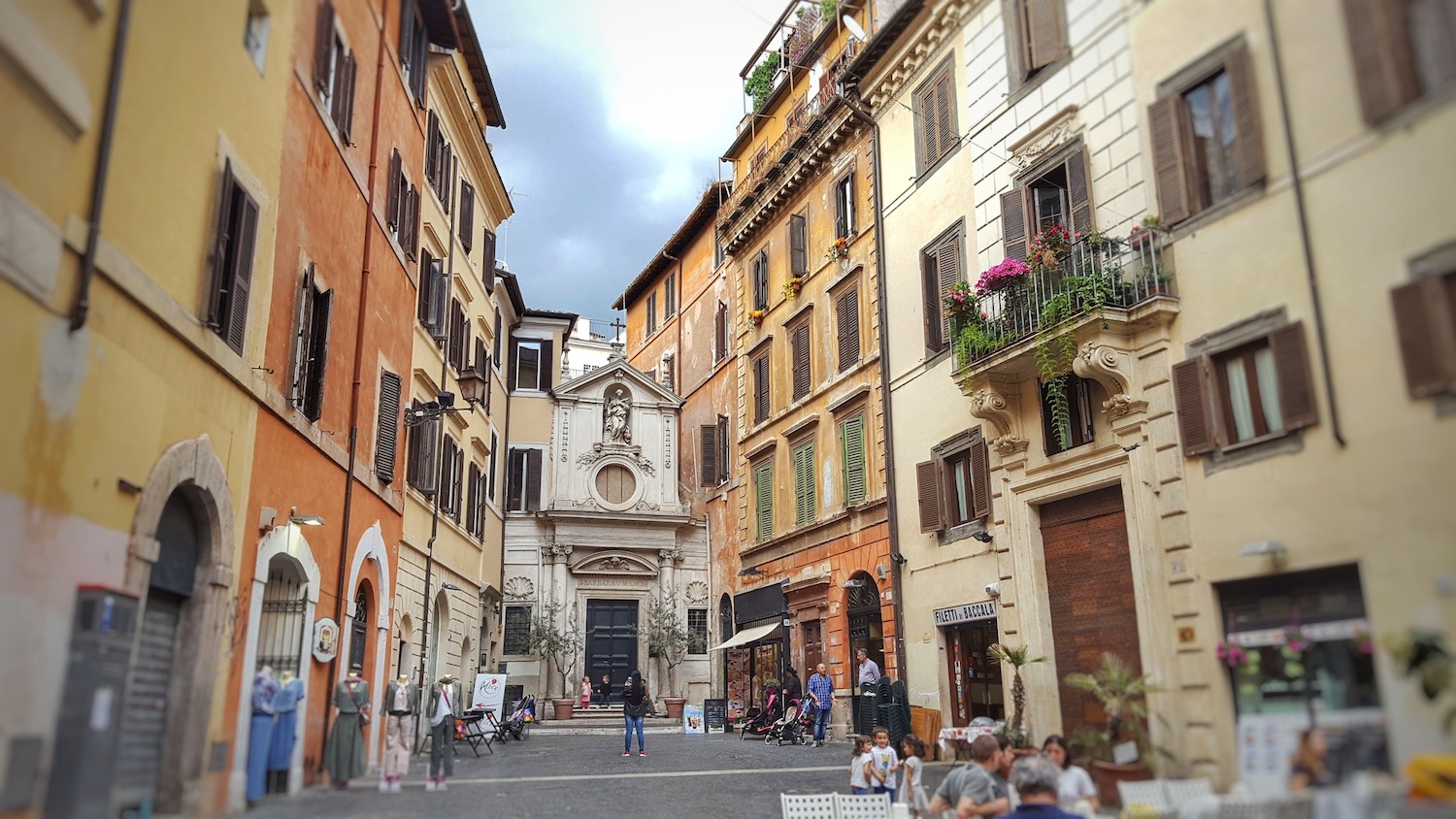 Rome provided the couple with numerous opportunities to step back in time – the Roman Colosseum and old government buildings will do that – but they also found pleasure in wandering off the beaten path and finding less populated areas with delicious fare and local charm. The Roman gelato wasn’t bad, either. 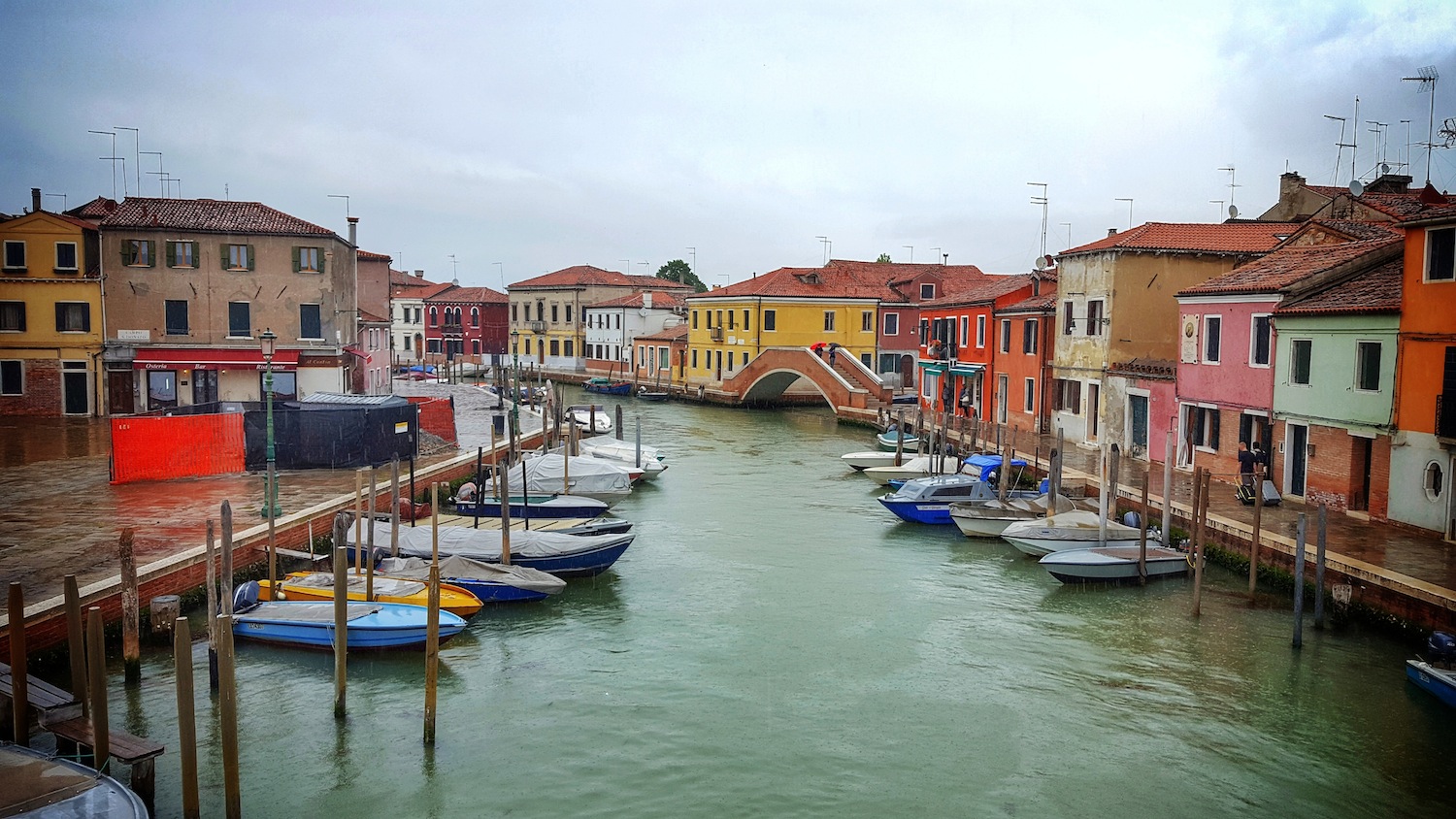 Just as they anticipated, Venice was a highlight of their European adventures. The ancient city known for its weaving canals was one of the more romantic places they visited. And, of course, they explored the city in the typical Venetian style: Gondola rides. 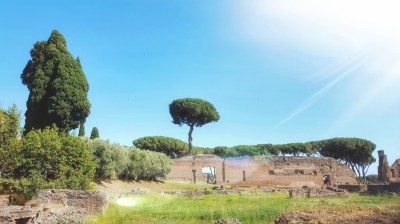 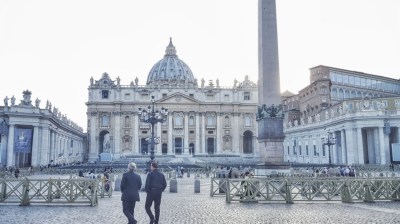 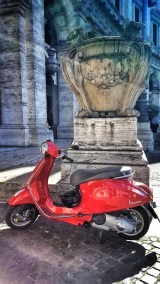 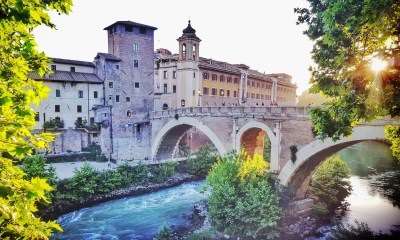 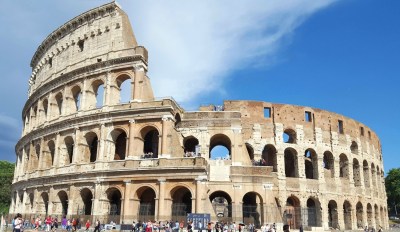 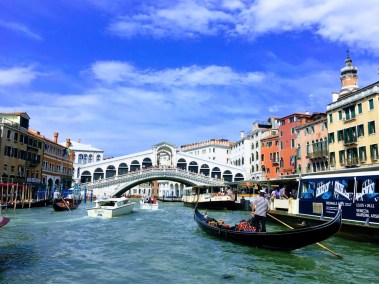 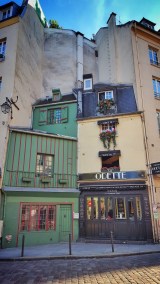 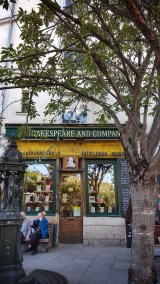 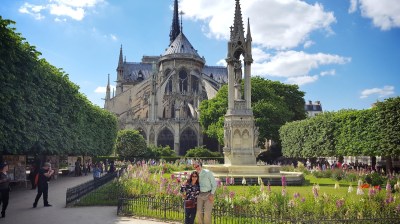 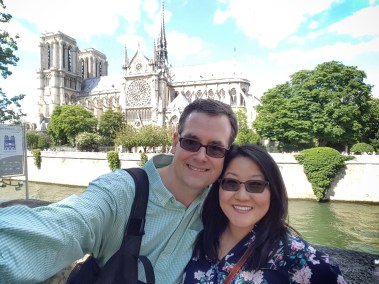 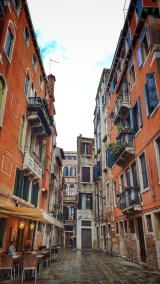 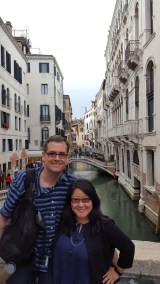 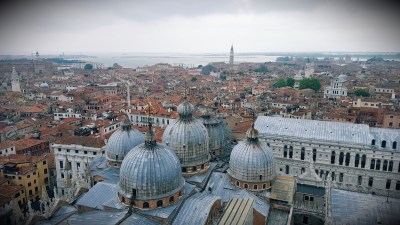 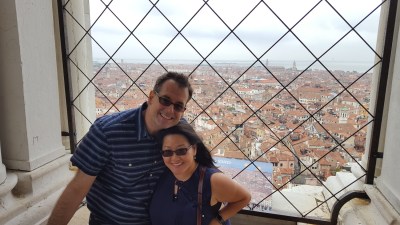 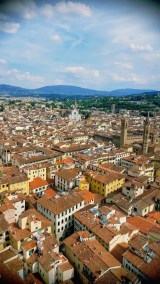 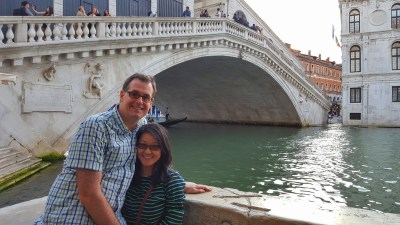 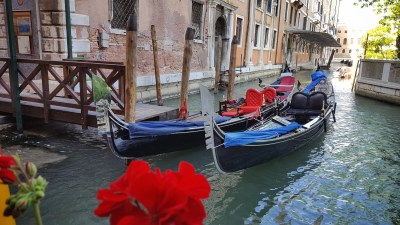 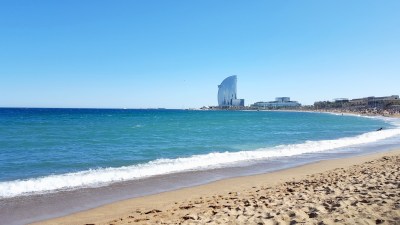 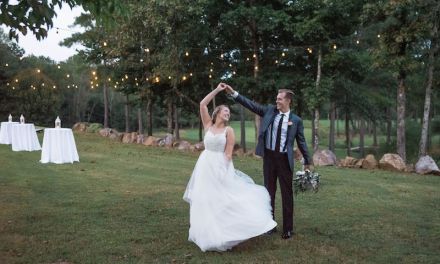 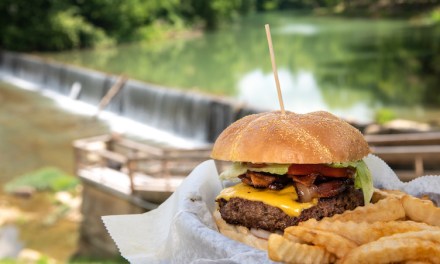 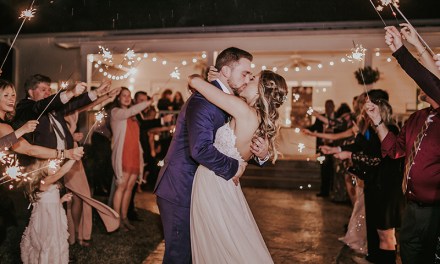