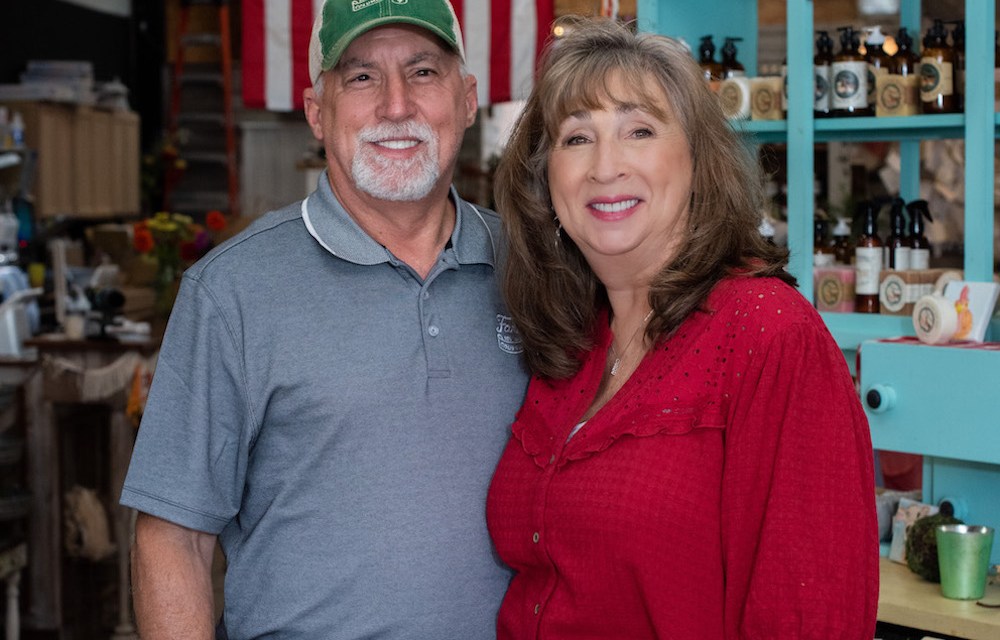 Cathy Hitt, the owner of the charming little store known as The Farm Company on Columbiana’s historic Main Street, will tell you she doesn’t have customers, she has a family, and she wouldn’t have it any other way. The road that brought her to small business ownership was one of both pain and healing, and it’s given her the chance to help others do the same in the midst of their own journeys.

In 2007, Cathy made what would turn out to be a life-changing decision. She bought an embroidery machine. She purchased it anticipating that she would make some fun items for her first grandchild that was on the way, but it ended up leading her to opportunities she couldn’t have seen coming. That’s because one month after the purchase, Cathy’s first husband, Lee,  passed away. 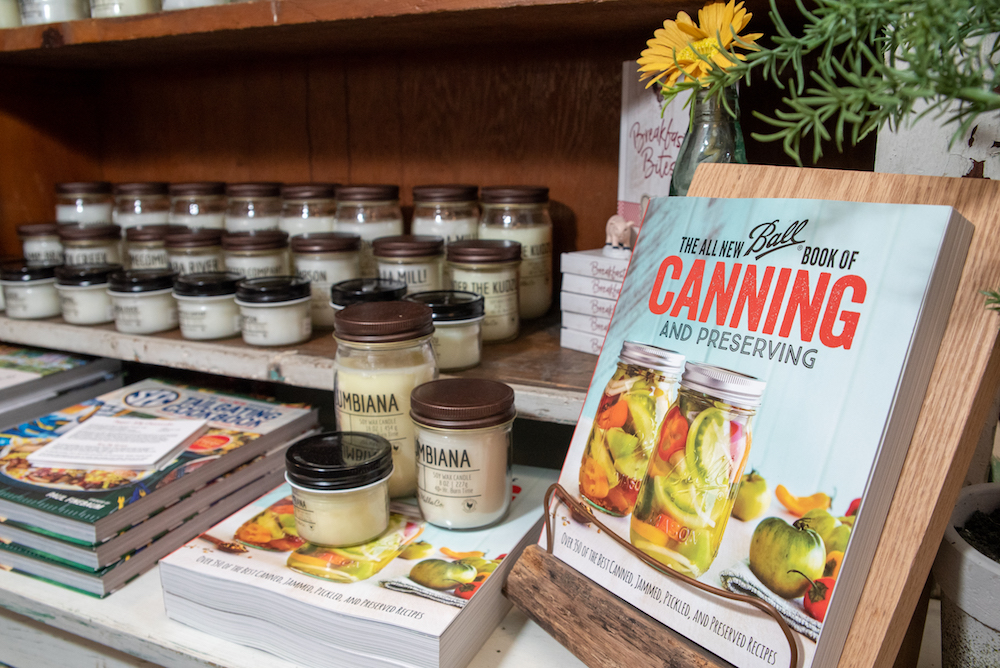 Cathy had been working for a nationally recognized oil and gas company for five years when she suddenly lost her husband. At that time, they had been leading a youth group at a small church and had been deeply invested in the lives of kids that went to her church. “It was my Camelot,” she says. “It was a great mix of kids from all walks of life.” She especially loved when kids that struggled with bullying and family stressors could find a safe place and acceptance among the kids she and her husband led.

Though her loss was sudden and painful, she stayed on for a year with her youth group after Lee passed, but she never forgot the feeling of the love and healing that was possible in that community. Cathy says that she learned during this time “not to lean on her own understanding,” and in doing that, she says she had the faith to continue to move forward in her life.

Eventually, in the wake of loss, the chance for a new path presented itself when Cathy met an old friend, Tiger Hitt, for the second time in her life. “I had always said that if God had a new guy for me, he was going to have to put him slap dab in front of my face,” says Cathy, and that’s exactly what happened thanks to her sister who “re-introduced” them. Cathy and Tiger had known each other in high school and even went to junior prom together. “I tell people I went to junior prom with my second husband, and senior prom with my first,” Cathy says, laughing. Three months after their first date, Tiger proposed during a Blue Moon on New Year’s Eve, and they’ve been together for twelve years now. 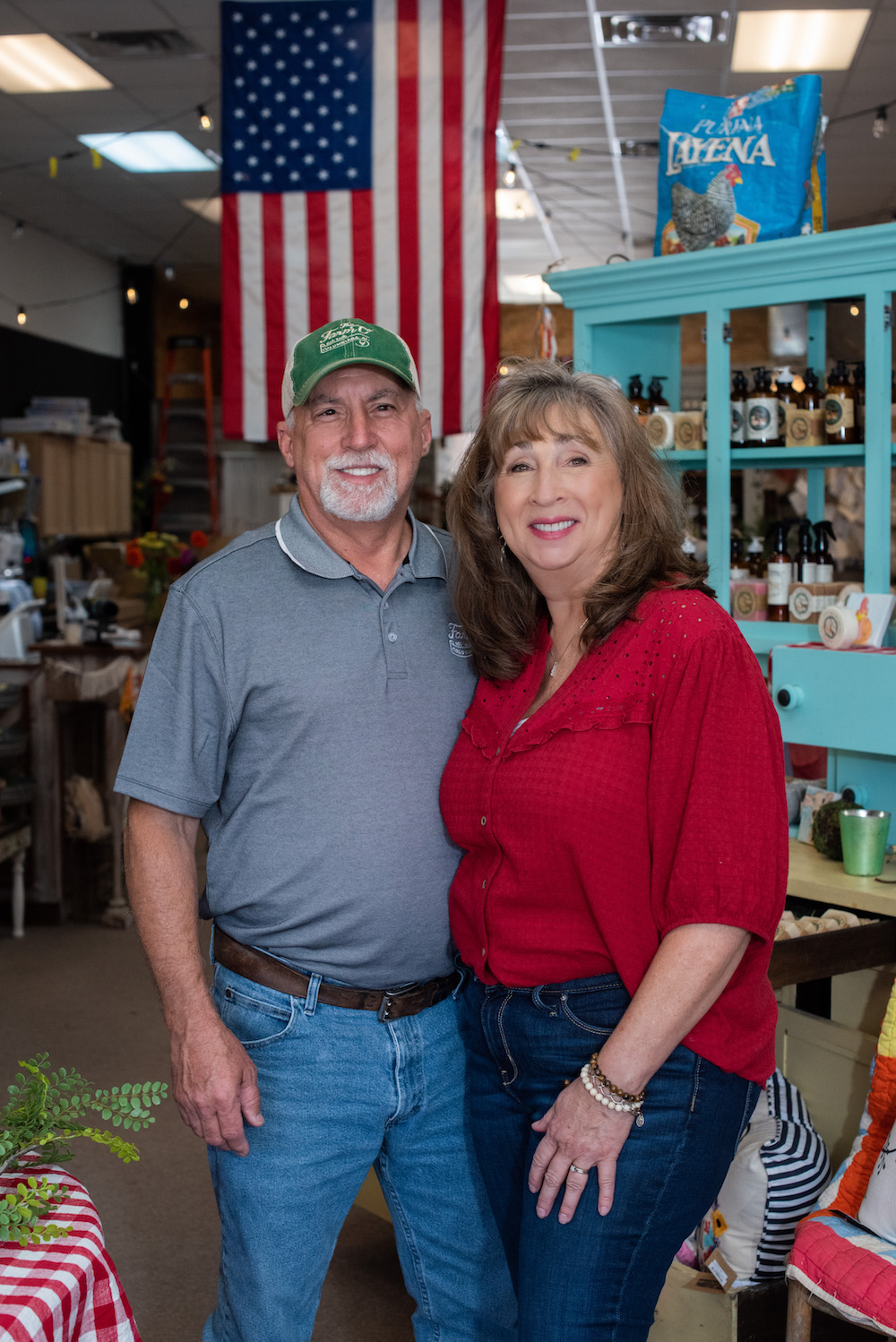 In the midst of all this, she kept creating with her embroidery machine. As the years went by, friends and family asked her to make things from time to time. Eventually, her hobby became a business, and she opened the first version of her endeavor, a little shop on the corner of College and Main Street called CC Happy Bug. But as she got to know the folks in the other stores on Main Street, a new opportunity arose to buy a more established business that she could work her embroidery business into seamlessly. That business was the well-loved gift shop, The Farm Company.

The Farm Company already had an established following of patrons and was known for its unique and often locally sourced merchandise. The previous owners had built a reputation for not only customer service but also community building through their faith. “They told me I was the first customer that came in that they didn’t already know,” Cathy says of their first interaction with owners Robin and Shannon. They became fast friends and eventually, as the owners were ready to move on to some new life journeys of their own, the opportunity arose for Cathy to take on The Farm Company to expand her business. 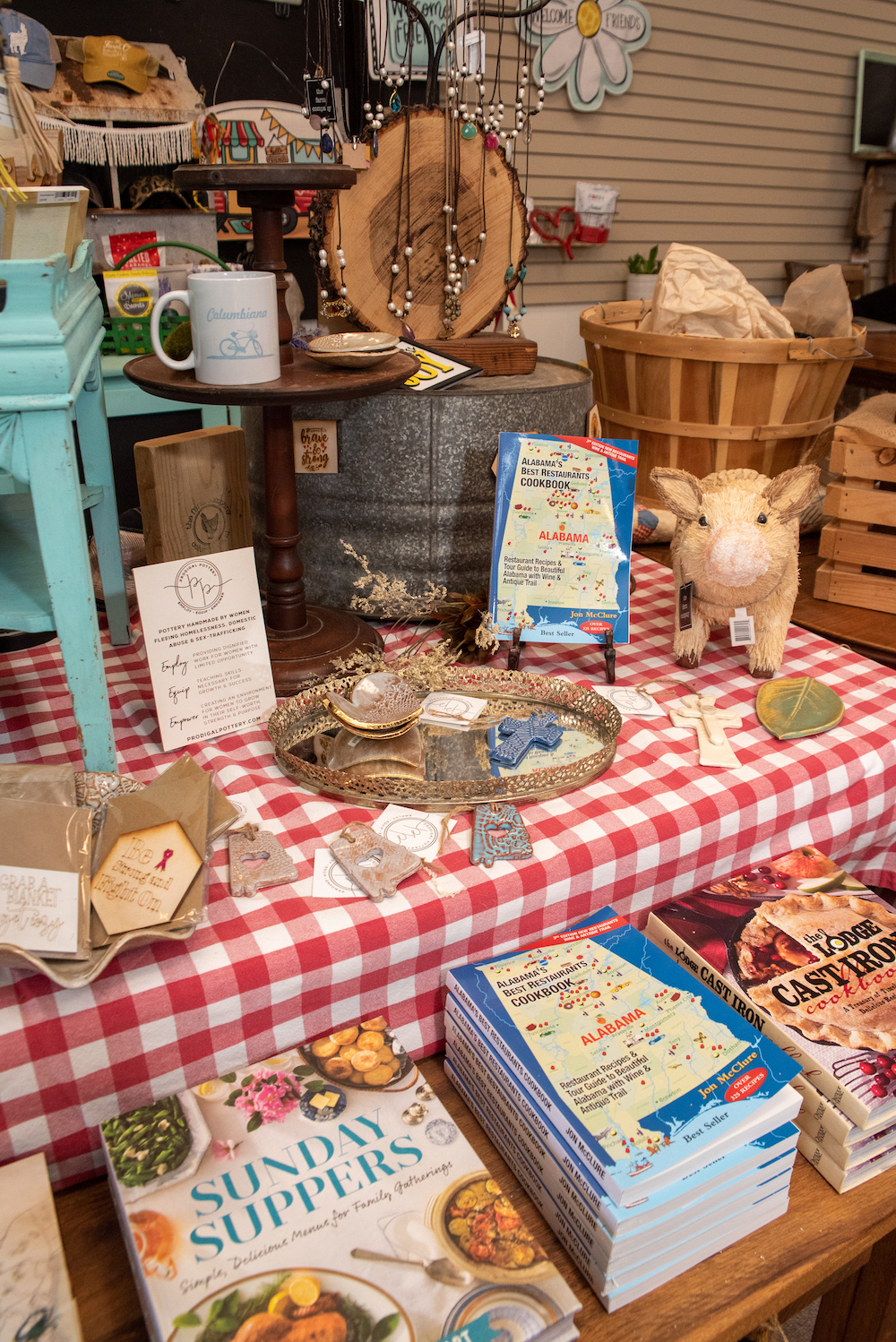 The Farm Company has been a joy for Cathy. After leaving the corporate world and entering the world of full-time entrepreneurship, she’s found that her shop gives her new ways to revisit that community of love and healing that she had when she worked with youth at her church.

When she took on the store, she kept the previous owner’s “prayer tree” as a major focal point of the shop. A literal tree, along the right side of the store, bears slips of paper with prayer requests of guests that venture into the store. People can leave a prayer request or take one to pray over. As people participate in this, Cathy has had the chance to get to know and care for her community better, and as a result, she’s become involved in multiple programs throughout the Columbiana area that contribute to her own healing and the healing of others.

“I’m always automatically attracted to women that tell me they are widows because of my own journey,” she says. “But I love partnering with groups like Owen’s House and the Working Wildcats too.” 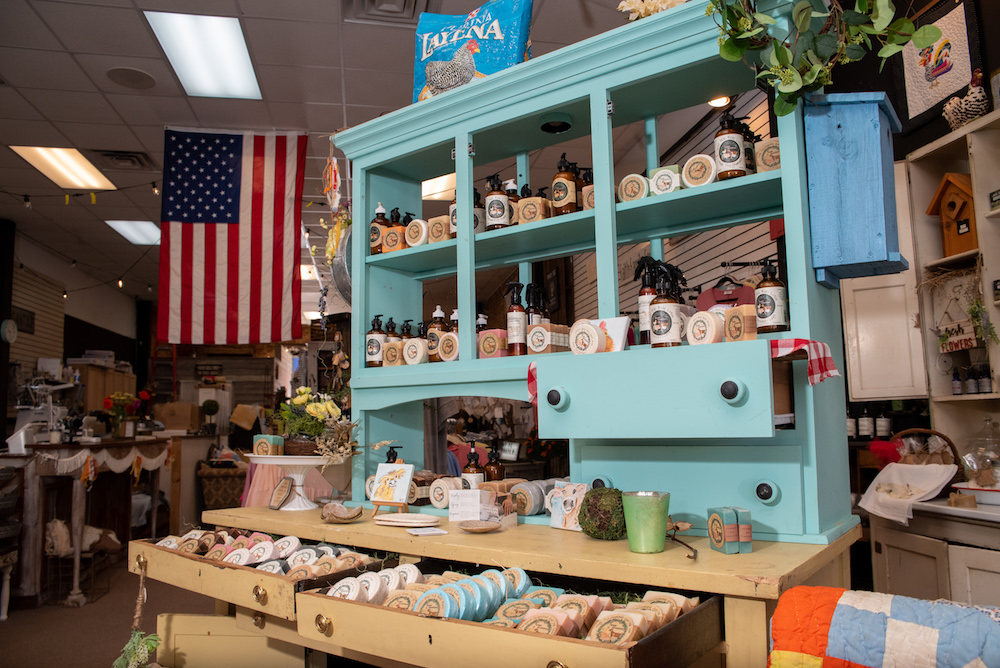 She’s also a cheerleader for all the small businesses on Main Street, pointing out other spots that she hopes her customers will go visit after leaving her store. “I want us all to be successful because when we are all successful, we all win,” she says. Cathy works behind the scenes with this philosophy, too, as the vice-chair of the Columbiana Main Street organization.

“I want us all to do well,” she says, and when she says it, you know she’s talking about not just the other small businesses she shares Main Street with, but the people of her little community who own and visit those businesses as well. 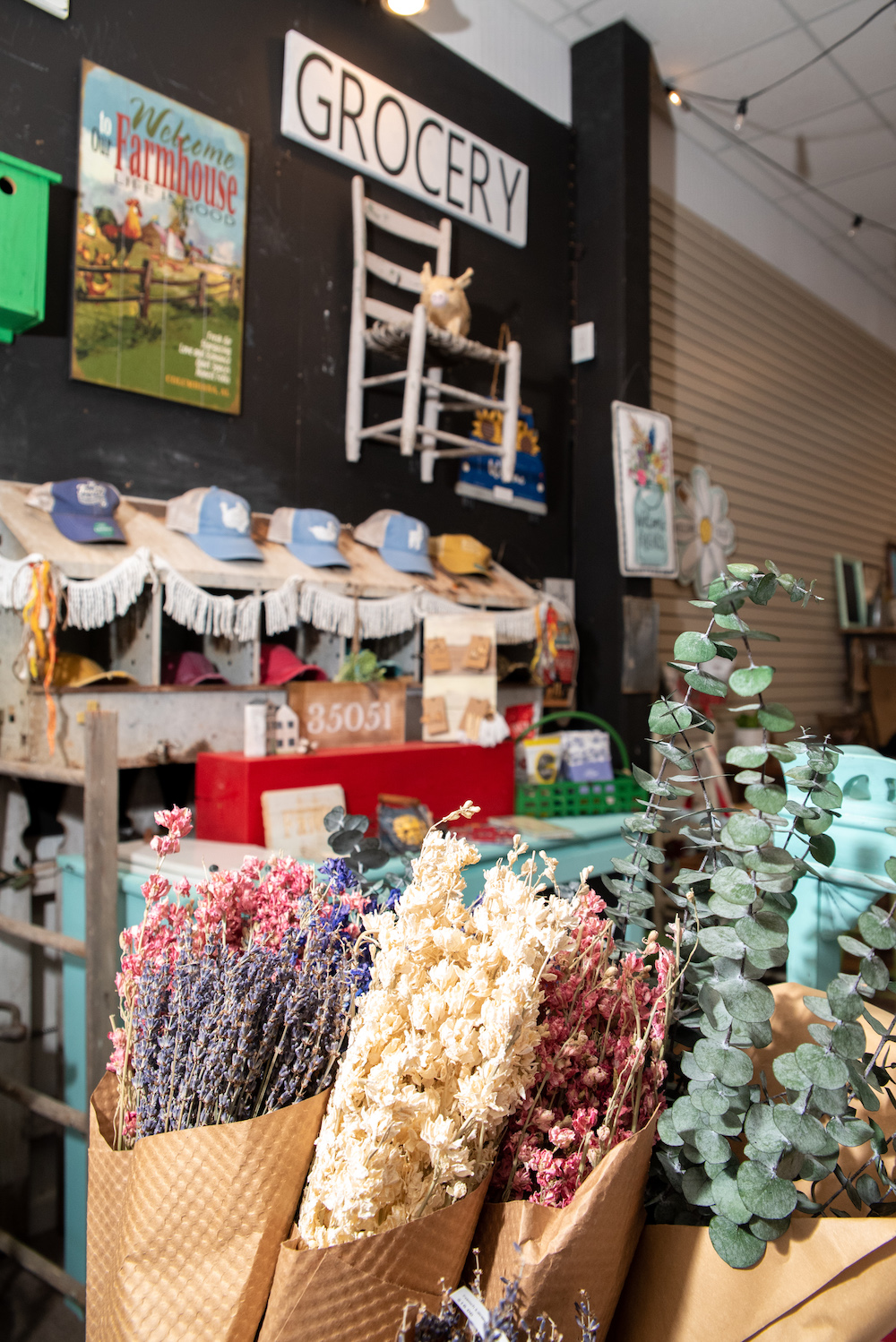 Faith– Because it’s what has carried her through everything.

Community– Because it’s what we’re here for, to pour ourselves into others.

Creativity— Because we are creative. We want to keep moving forward with new ideas and not get stuck by obstacles.

Encouragement — Because we’ve already been through “it,” we can help others get through “it.” 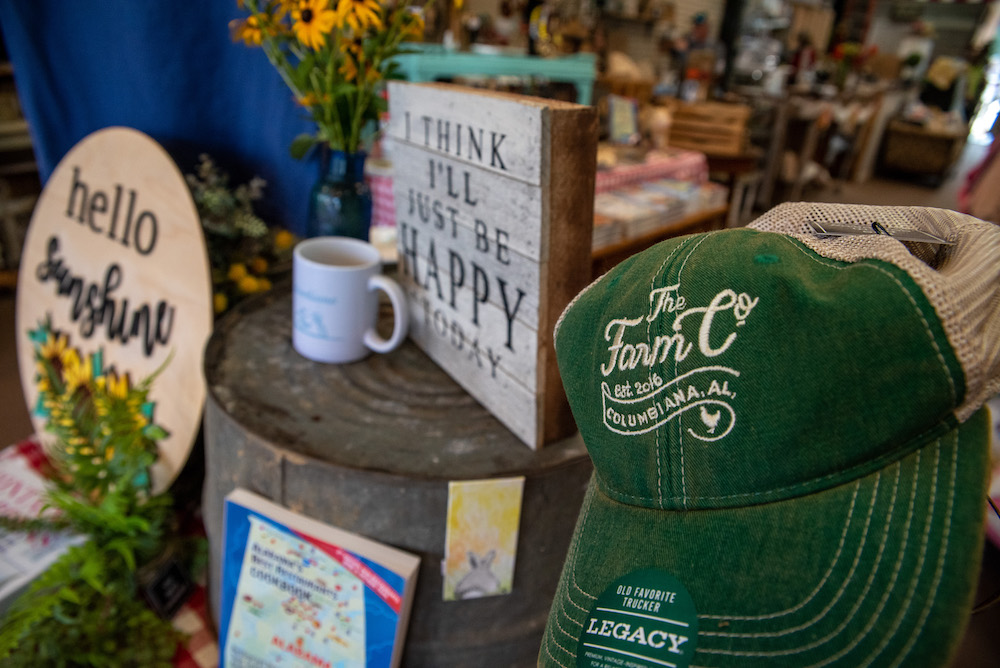 Local Brands at The Farm Company

Items by the Farm Company 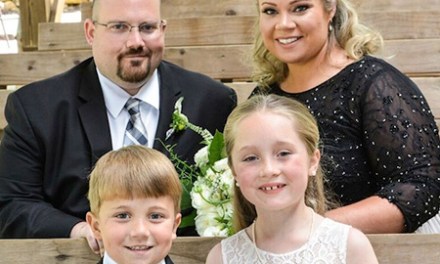 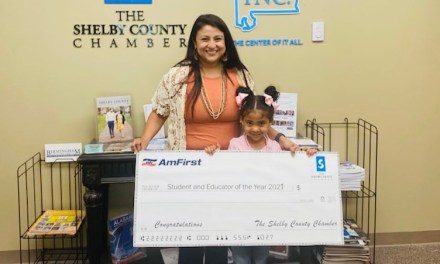 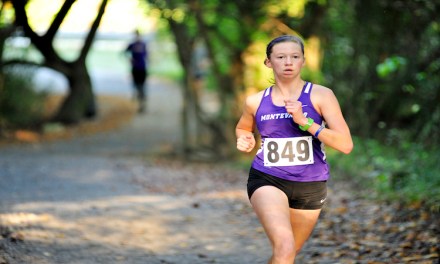 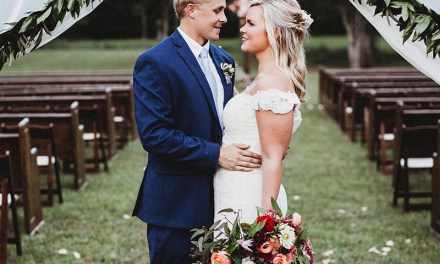