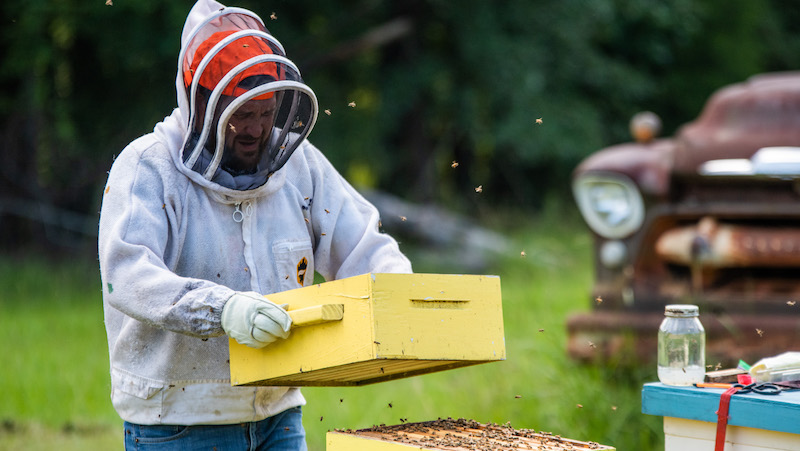 A golden hue from the morning sun streams over 35-year-old Patrick Johnson’s face as he looks out on the people driving past his farm. It seems in some ways to symbolize his big dream for his venture, or maybe it’s just a reminder of his golden honey. Standing on a bridge over I-65 beside his farm, he doesn’t just see cars driving by. Patrick sees 40,000 potential customers.

The moment you first step foot on Patrick’s farm in Calera, you may only see empty rows of tilled soil ready for blueberry bushes to be planted or a few bees swarming around the opening of a hive, but the moment he starts talking, you realize that’s just the beginning. “You’re looking at recipes being made right now,” he says.

Patrick transitioned from serving in the Navy in 2009 to eventually becoming a local teacher, coach and farmer, but his identity as a veteran is influencing his new work and he is no stranger to an agricultural life. As the son of a salesman and hobby farmer in Randolph, Alabama, Patrick grew up on a small horse farm. But this time he’s digging a little bit deeper into what his dad taught him for a bigger purpose. “My daddy always told me to leave it better than you found it, and that’s what we’re trying to do here,” Patrick says.

After serving in the Navy for five years as an awarded Naval Special Warfare Armorer, Patrick suffered from a traumatic brain injury sustained aboard the USS Thomas S. Gates (CG-51) while early in his Naval career in 2005. He would go on to serve with the US Naval Expeditionary Guard Battalion to Camp Delta, Guantanamo Bay, Cuba on a yearlong deployment as part of the Global War on Terrorism in 2006, four months after his initial injuries. In 2007 he was transferred to Stennis Space Center, Mississippi, attached to riverine unit Special Boat Team 22 in support of weapons operations until he would finish his service 2009. 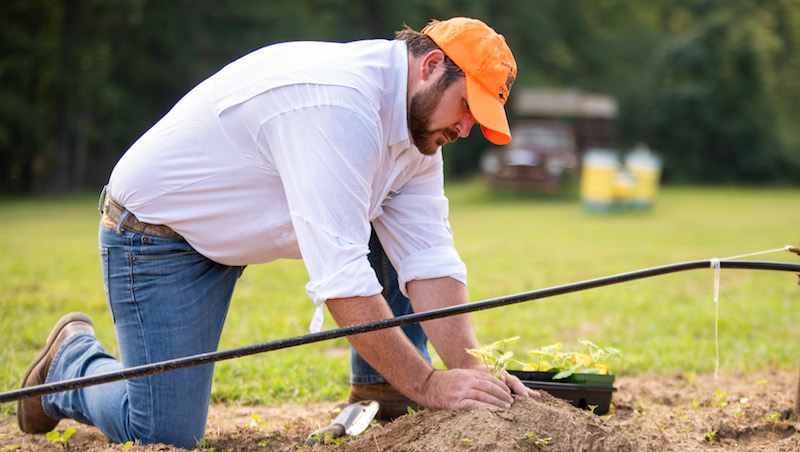 Unaware of how severe his physical or emotional injuries were from his service, he moved back home to Montevallo, Alabama, to attend school at the University of Montevallo, and graduate with a Bachelor of Science in 2012. Due to health circumstances, though, he nearly a year homeless during 2013 and split time between Las Vegas, Nevada, and Birmingham. After years of a difficult but successful transition, he found himself looking for a hobby. Then he rediscovered a lost love for agriculture and beekeeping that he hadn’t experienced since high school when he was in the FFA. It’s the meticulous work of beekeeping, from harvesting the honey to carefully placing each part of the hive exactly back in place as to not disturb the bees, that reminds Patrick to tuck his stress away on a bad day and focus on the job ahead.

The bees may be good for his fruit crop, but it’s the therapeutic element is the reason he does all the work on his farm. “If I’m stressed out, I can open a hive, and it kind of just seems to go away,” he says. “My bees are my therapy”.

Now he wants to share that same experience with others. As someone who understands the hardships that transpire from serving in the military, he offers veterans the opportunity to work with the bees and on his farm with him as a form of apiary therapy and to share his love of agriculture for free. He calls the for-profit entrepreneurship venture Veterans Farming Initiative.

His dream isn’t necessarily to have these veterans start a farming business like him, but to inspire them to use the knowledge he pours out to them to start growing a garden in their backyard or start a hobby in agriculture. It’s his hope that with some hard work and dirt on their hands, they will feel grounded while experiencing a deeper connection.

If someone finds healing in digging or jumping in a beekeeper’s suit, then he says they are always welcome to come back too. He wishes he had “ten arms and ten legs” to help out with the farm, since most of time it’s just him working. 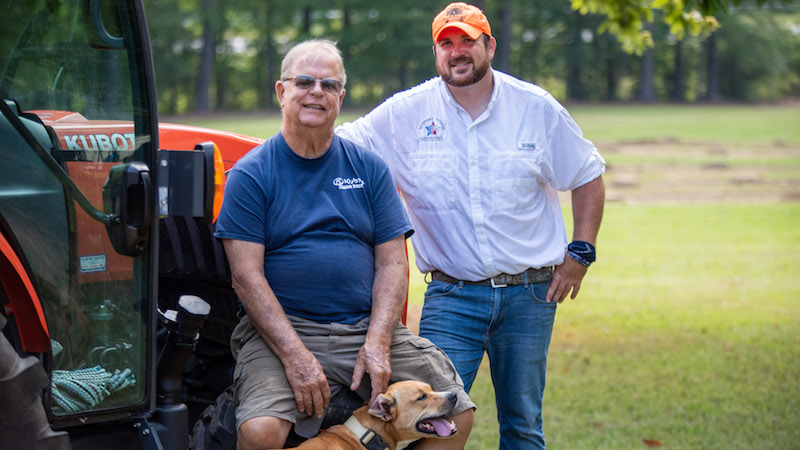 Pat Johnson stands with Billy Graham, Billy is the property owner and VFI mentor and advisor.

Before now, Patrick has worked for nearly eight years with the homeless veteran community all over Alabama through his former non-profit organization, Homeless Veterans Initiative of Alabama. Bringing together a band of veterans, Pat takes care of the bees to harvest honey for another business owned by a pair of veterans that double as master beekeepers. Stacy and Ben VanDortrecht of S and B Apiaries of Elmore, Alabama, started actively teaching him the knowledge of beekeeping in 2019. Then “somehow through the grapevine,” Patrick connected with Billy Graham, who, Patrick wanted to point out, has “no relation to the preacher,” but is just as interesting. Now is the Army veteran is leasing land to Patrick for his farm.

The land is scattered with salvage cars from Billy’s business, Billy’s Foreign Car Salvage, and even an old school that’s now a barn. Billy’s warm, country accent can pull you into a conversation like you two were friends for life, while Patrick is more focused on telling you about the business to be done. But while Billy may be on the phone with people from South Africa or Australia selling car parts for his business, Patrick is farming to invest in the people of Shelby County.

For now, Patrick is connecting with local food banks to address issues with food insecurity and poverty within the community in order to help feed locals in need using his knowledge of agriculture through his fledgling business venture. Patrick’s plan for the farm is to ultimately use both the honey and the fruit from the crops he’s planning to plant, such as blueberries and blood oranges, to produce honey and fruit-based liquor. From mead to brandy-wine to moonshine to beer, it is a niche and novelty business for Shelby County, and once VFI is fully operational he will be the only venture in the state to produce completely honey-based small batch spirits.

“It’s a long, grinding process,” Patrick says, noting farming takes planning a year in advance, and he is only three years into the project. “It turned from something that was very therapeutic for me to something I tried to figure out how to make money with,” he says. “You try to pick one thing you think you’ll be really good at.”

There’s a lot of moving parts that go into making honey-based spirits, from making sure the crops are good to planning specialty crops in the winter and summer in order to feed the bees to making tasty recipes for honey spirits.

Another part of the process will be selling the small-batch spirits once they’re ready, and he wants to work with folks nearby. He’s planning to sell the liquor he makes in the local markets and is looking for restaurants and other businesses in Shelby County who are interested in selling them. He’s also interested in selling specialized bottles for weddings or other events and letting them help create a personalized recipes memory through a recipe.

Today he’s still in the process of developing recipes for just the right taste of these honey-based spirits. While doing so though, he often looks out on his farm with tilled soil ready for fruit trees to be planted in it and the hives ready to be harvested for honey. “There’s a lot to be proud of,” he says.

Learn more about Patrick’s farm by visiting @VeteransFarmingInitiativeAL on Facebook.

In October of 2020, Patrick participated in the three-month Institute for Veterans and Military Families – St. Joseph’s University -Entrepreneurship Bootcamp for Veterans along with 22 other veteran entrepreneurs from all over the country. In the venture pitch competition at the end, his honey distillery venture earned him first place among the field and a grand prize of $5,000. 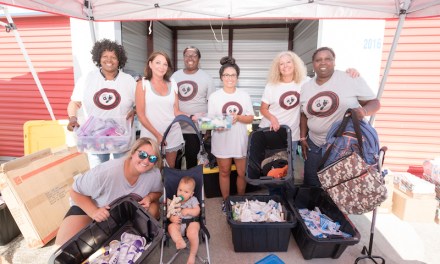 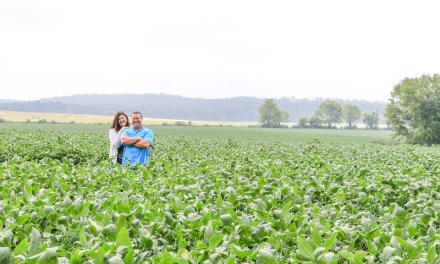