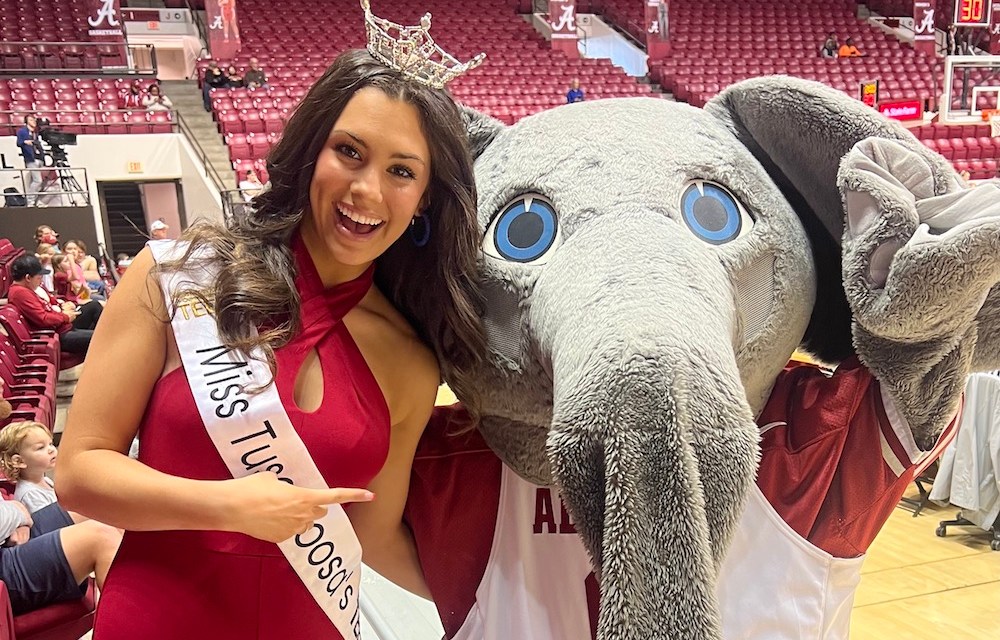 Ali Mims has been making a joyful noise ever since she can remember. In fact, you could say she was born with joy—literally.

“When my mom was pregnant with me, she was talking to my grandparents about what my middle name would be, and she said, ‘You know what? Her middle name is going to be Joy because she’s going to be joyful,” Ali says. “And I am. I’m happy all the time.”

A few months later, Alixandra Joy Mims came into the world–specifically Harpersville, Alabama, along with her destiny to bring “joy” to others. Now 15, Ali recounts her story with an energy and enthusiasm that’s the embodiment of her name.

“No one calls me Alixandra except on the first day of school or if there’s a substitute,” she says with a laugh. “But the funny thing is a lot of people at school will just call me Joy.” 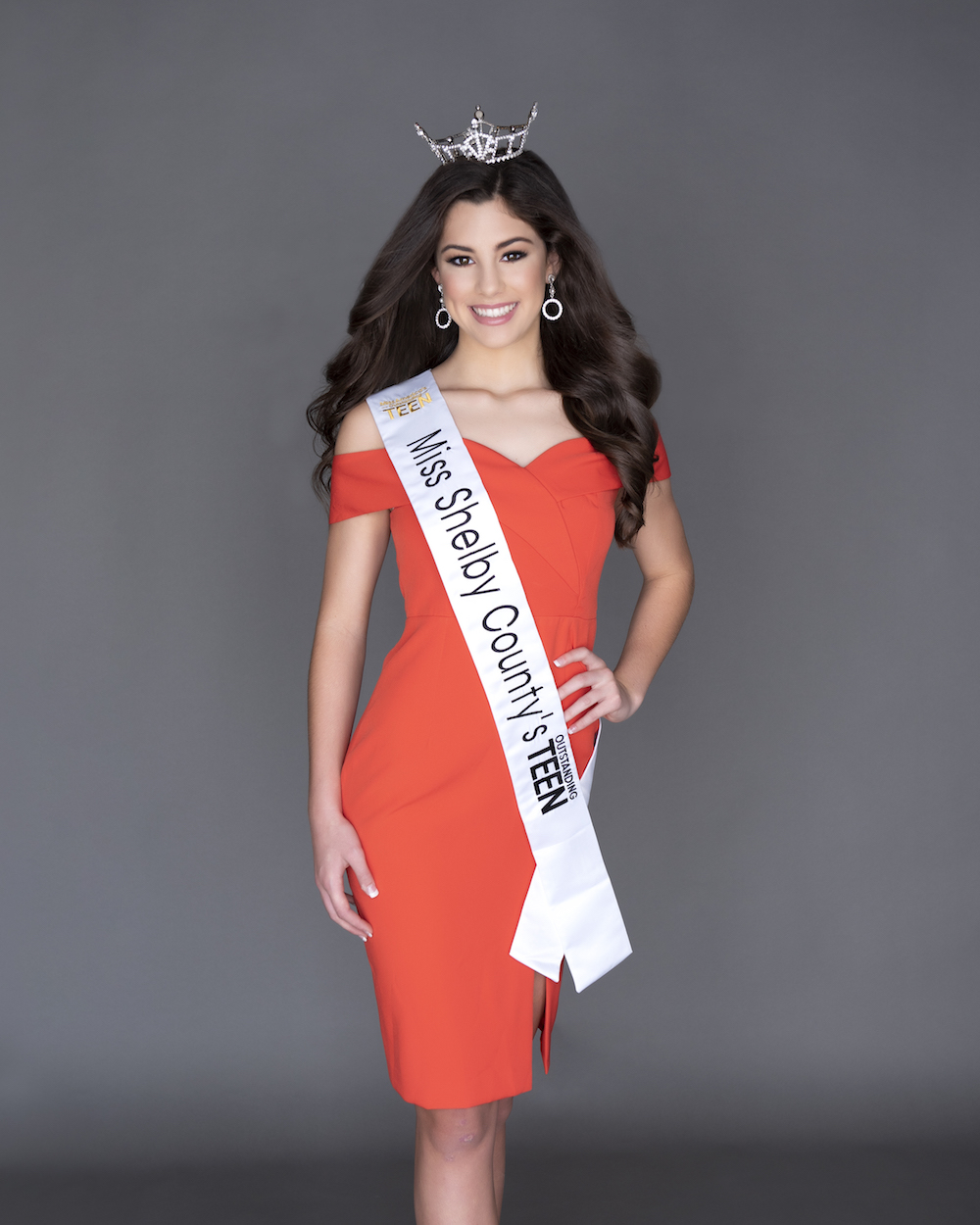 Her friends know the name fits. At 6, Ali would go to her grandparents’ house, only two minutes away, and play their piano. She never had any formal lessons, but by the time she was 9, she was playing everything from Beethoven’s “Für Elise” to Bruno Mars and Adele hits. When she was 8, she locked herself in her bedroom after watching America’s Got Talent and learned the words to “O Mio Babbino Caro” in 30 minutes, after which she gave a little singing performance for her mom. These days she can sometimes be seen singing the national anthem at local and regional sporting events.

But hints at the future significance of her middle name had really surfaced much earlier when Ali was just 3.

“I saw a bus outside with kids in it, and I asked my mom what that was. She told me, and I said when I grew up, I wanted to drive a bus for kids with disabilities,” Ali says. “By the time I was in junior high, I knew I wanted to go to college for music therapy.”

As 2022 Miss Shelby County’s Outstanding Teen and now 2023 Miss Tuscaloosa’s Outstanding Teen, Ali has been able to put her love for helping children with disabilities into action through her platform, “Joyful Noise: Bringing Joy Through Music,” a program in which Ali raises money to purchase instruments for local schools to use for musical education and therapy. 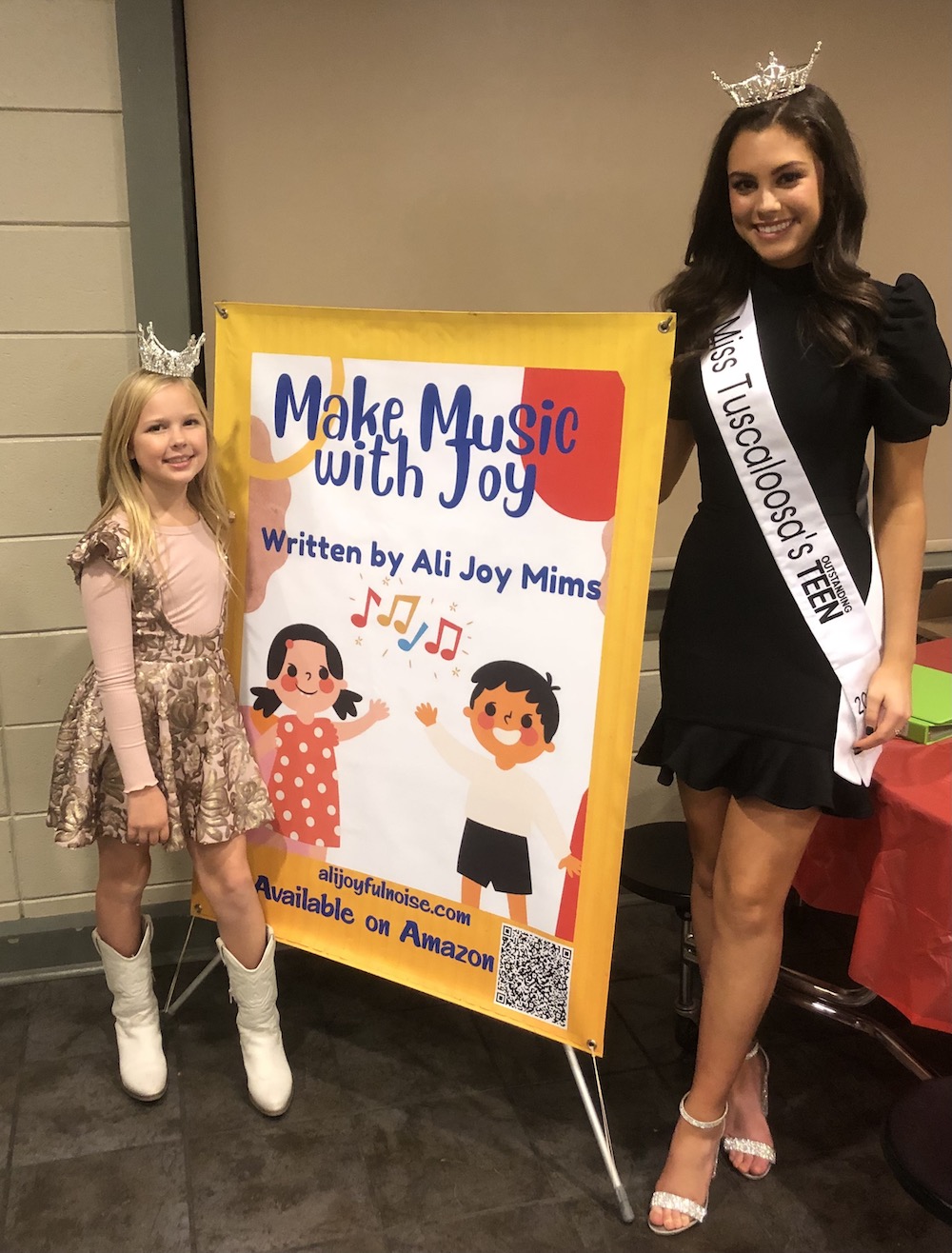 Ali says she’s working with Governor Kay Ivey and the Alabama Department of Education to incorporate music education with music therapy in all schools.

“Seventy-six percent of Alabama schools in rural areas do not have music education. My goal is to take that 76 down to zero because that’s just unacceptable,” Ali says.

When Ali entered her first preliminary pageant and was asked what she wanted her social impact initiative to be, it only took her five seconds to answer. The name, however, took a little longer. Then she recalled Psalm 100:1-2: “Make a joyful noise to the Lord, all the earth. Serve the Lord with gladness. Come into His presence with singing.”

“It doesn’t matter how good it is, as long as it’s joyful,” Ali says. “It was a God moment for me. It was like God was saying, ‘Ali, this is what you’re going to do.’”

Ali says she loves how music is a “universal language,” with the ability to connect people from all walks of life. Although she’s a happy person, Ali has been open about her struggles with anxiety and how music has been a great coping mechanism. She wants to show kids the healing power of music.

“The way I like to explain it is when I have anxiety, I get butterflies in my stomach But when I sit down to play the piano, the butterflies fly away,” she says, acknowledging her own love for butterflies and then looking down and lifting up her silver butterfly necklace. “I’m wearing one now,” she says.

Ali has worked with students in over 20 self-contained classrooms and has volunteered with many organizations including the Walk to End Epilepsy and the Alabama Veterans Association community, raising more than $130,000 to be used toward music education and therapy in the local area. 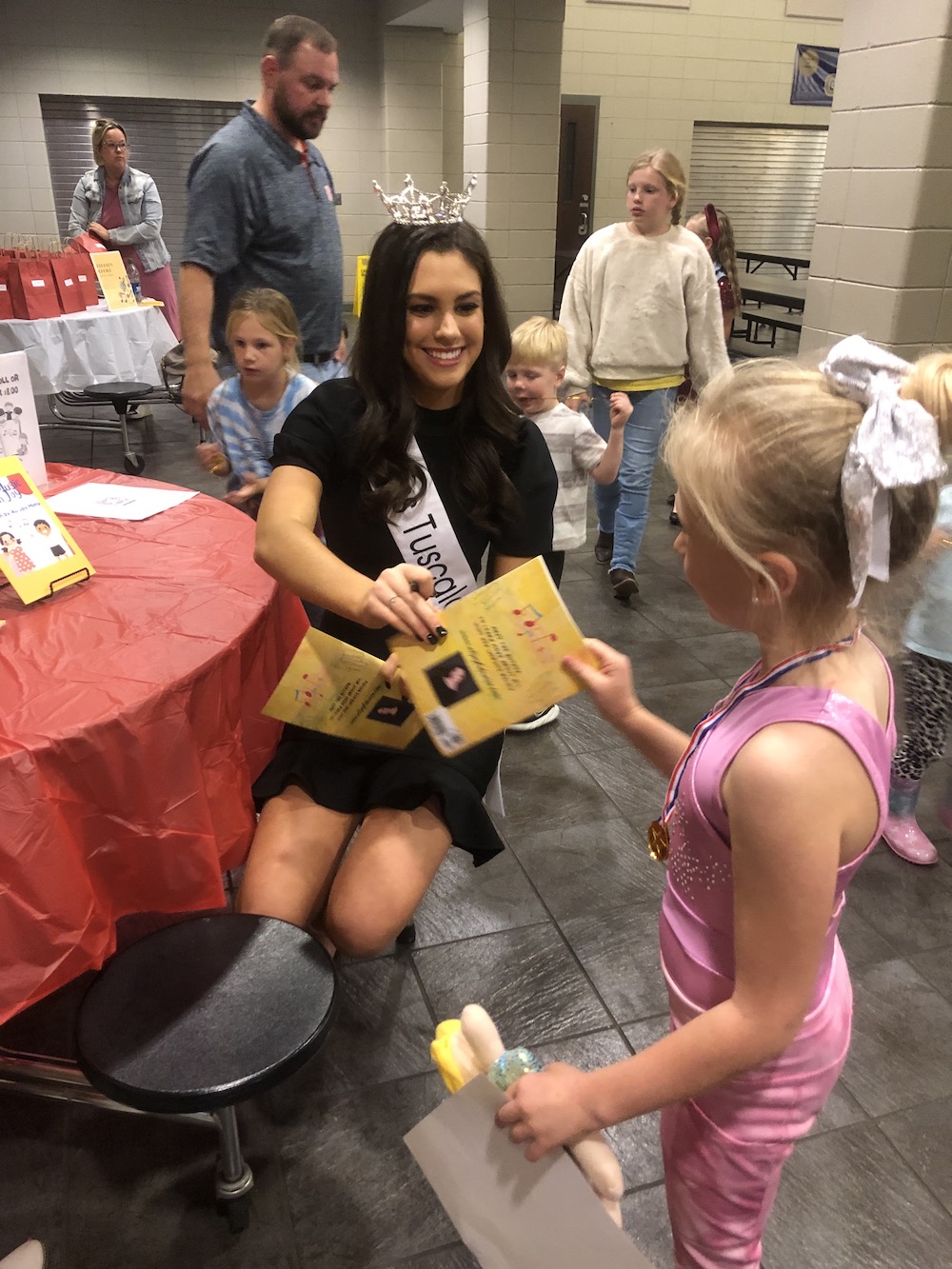 As an additional way to raise money for the program, Ali wrote a small children’s book, Make Music with Joy, which was published in October. In the book, Joy shows children how to make their own toy instruments at home. Kids who buy the book from her in person at local events can either receive a complimentary “Joy doll” or a maraca egg shaker. When Shelby County Schools Superintendent Dr. Lewis Brooks interviewed her for his podcast, he purchased copies of the book for every music teacher in the county.

“Within two days it hit number three on Amazon for books for children with disabilities,” Ali says. “When my mom told me that, I just cried. I’m still trying to wrap my head around the fact that I did that.”

Ali went on to compete in the 2022 Miss Alabama’s Outstanding Teen where she reprised the Italian opera she sang in her bedroom years before. At 14, she was the youngest contestant to place in the top 10.

Throughout her journey, Ali credits her family with support and being good role models. Her mother, Haley Houston (1997 Miss Shelby County), studied opera at Samford University and is now a music teacher at Mt. Laurel Elementary.

“I’ve been in the classroom with her, and I’ve seen how much the kids enjoy it,” Ali says.

Ali’s sister, Daley, 20, was involved in show choir and cheerleading, and she also competed in pageants when she was younger. Ali’s other sister, Nora, 4, is already taking gymnastics lessons. Her stepdad, Paul David, also works with children with disabilities at Linda Nolen Learning Center in Shelby County Schools. 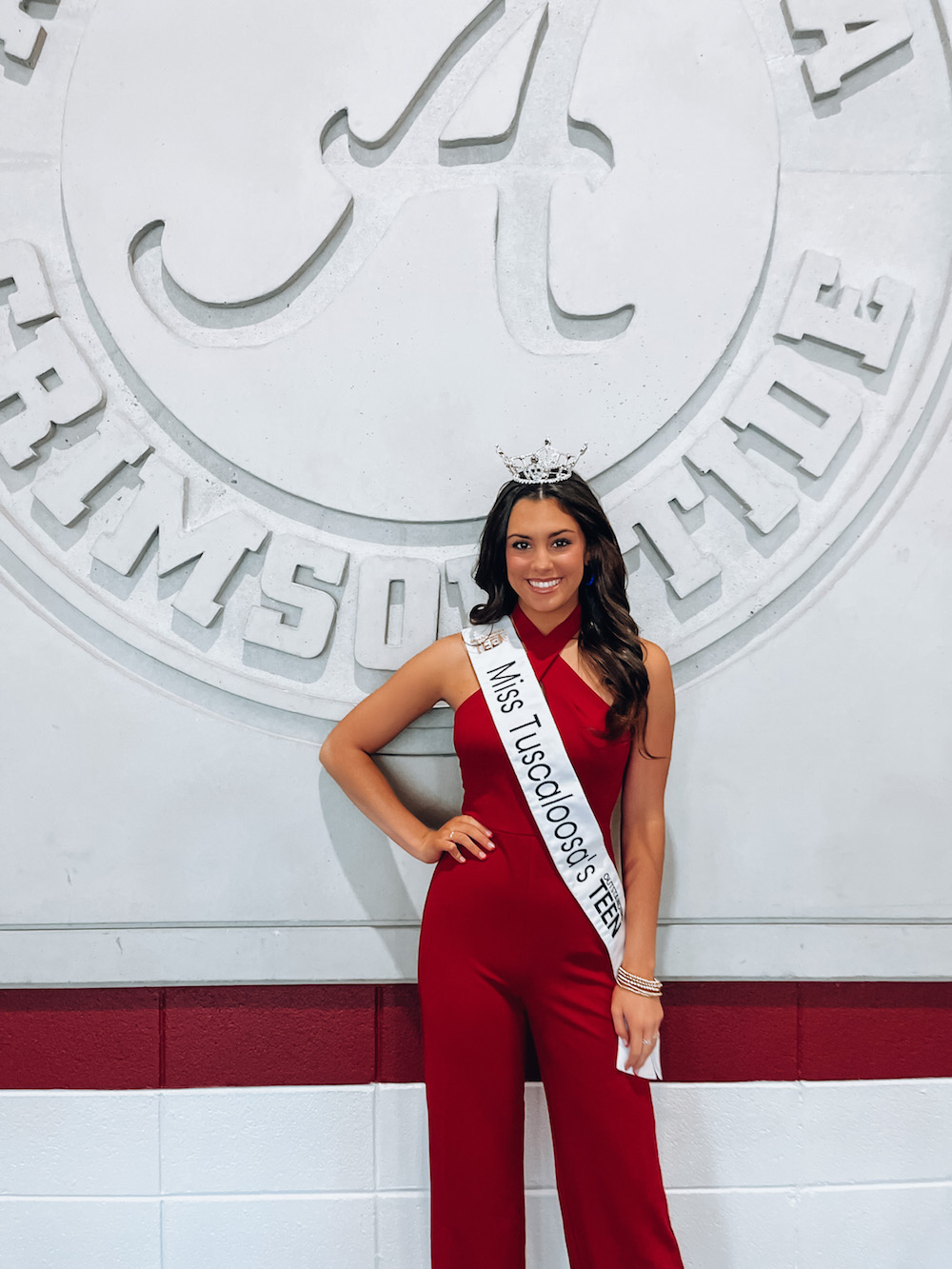 Having always been crafty, Ali decided to make “Make a Joyful Noise” Christmas ornaments to sell to raise money to purchase instruments for the Linda Nolen school, while Haley made matching T-shirts for participants to wear at the fundraiser. “I made my own clothes for my American Girl dolls when I was 7,” Ali says.

“They all immediately ran up and started playing,” Ali says. “They got to experience the joy of making music themselves.”

The new year will bring on more adventures. Ali will compete March 10-12, 2023, at Thompson High School for the Miss Alabama’s Outstanding Teen title. She’s also planning a trip this spring to Nicaragua to help a music teacher there provide instruments to children with disabilities. This is all while still navigating life as a sophomore at Chelsea High School, cheerleading, taking dual enrollment classes and leading student ministry activities at her church.

Ali admits it’s a lot to take in for someone who does not yet have her driver’s license.

“My great-grandfather gave me some of the best advice. He said it is so important to stop and take a step back to look at your life. If you don’t take time to slow down and enjoy life, it will pass you by and you will miss out on the important things,” she says.

For Ali, these are the important things, and she looks back in amazement at what she’s already accomplished in her young life. She remembers when she dressed like Cinderella and sang “When You Wish Upon a Star” at her elementary school talent show. Little did she know how many wishes she would later make come true, not just for herself but for the kids so dear to her.

“Nothing fits me better,” she says. “I want my passion to have a purpose.” 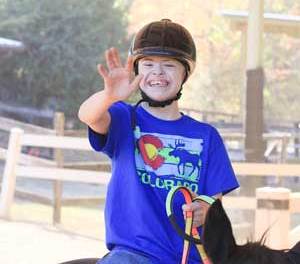 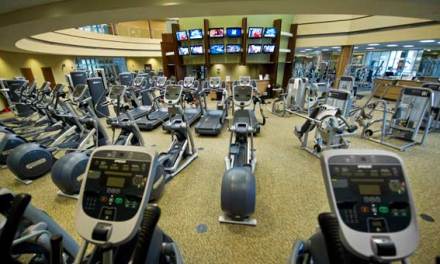 Fitness for all ages 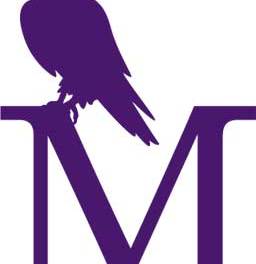 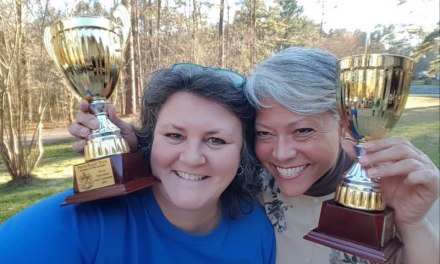